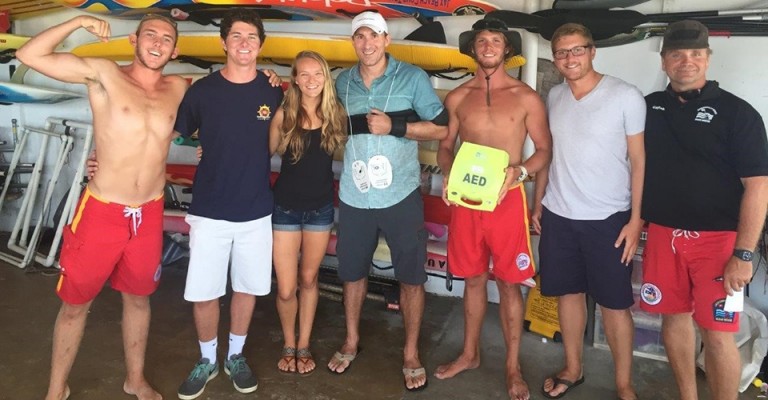 Sudden Cardiac Arrest (SCA) can happen to anyone, at any time. Even someone in the prime of their life and who has no prior health conditions that would suggest the likelihood of an SCA event.

On June 27, 2015, J.R. Bourne, Manager of Corporate Marketing for the PGA Tour, was spending a typical morning on a Jacksonville, FL beach, kicking a soccer ball around with a friend. He began to feel lightheaded and then collapsed. J.R.’s friend thought it was a joke, but that quickly turned to fear when J.R. began shaking, eventually becoming still and unresponsive.

Luckily for J.R., a physical therapist was practicing yoga nearby. She ran over to see what was happening, and quickly began administering CPR. After only one minute of CPR, the Jacksonville Beach Volunteer Life-Saving Corps appeared. The lifeguards had begun their shift only 20 minutes prior and had not yet driven their response truck to a different area of the beach, so they were moments away from J.R.’s location.

The lifeguards brought their rescue expertise, and 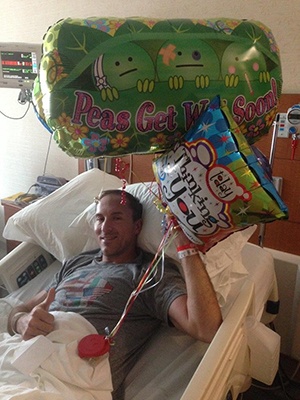 their automated external defibrillator (AED), to the emergency scene. They performed team CPR as one of them prepped the AED. Two shocks were delivered, with J.R. regaining consciousness briefly after the first shock. He was unable to open his eyes or verbally respond, but he remembers hearing the urgent conversation among his rescuers. “I heard them talking about someone’s pulse returning and then starting to lose it again, and I wondered who they were talking about,” he recalls, “and then I was gone again.” He had become unresponsive again and the lifeguards delivered a second shock.

By the time the ambulance arrived, J.R. was conscious and talking to EMS.

“It’s almost too overwhelming to even think about,” J.R. explains. “That this happened to me. That I was so lucky that all the steps in the Chain of Survival were followed so perfectly. I lived through something that so many others don’t survive. It’s too much to comprehend and the emotional acceptance of what happened took some time.”

With that eventual acceptance came a desire and commitment to spread the word about bystander training for CPR and AED. The PGA Tour organization holds biannual CPR/AED trainings and J.R. has taken on the role of motivational speaker at the classes. He also works with local training organizations to teach hands-only CPR to children through Jacksonville school system, where he explains first-hand just how important bystander intervention can be.

After recovering from his SCA, J.R. met with the lifeguards who saved him, thanking them and eventually accepting a position on the Board of Directors of the Jacksonville Beach Volunteer Life-Saving Corps to assist with marketing and fundraising efforts. “I’m proud to connect the lifeguards to the broader community this way,” he says. “We have this Baywatch perception of lifeguards who hang around the beach enjoying themselves all day, and that just isn’t the case. These are ocean rescue-trained heroes and it’s rewarding to showcase the important work they do.”

And what about those who have dedicated their careers to emergency care training? What would this SCA survivor say to them? “Keep spreading the word, teaching the public and pushing for AED access laws in your communities. Stories like mine are the best teaching tools. Before this happened, I didn’t even know what an AED was; I ask myself ‘Would I have known what to do with one?’ That’s what emergency care instructors give to the world. You empower people to run towards the emergency, not away from it because they know have the skills and tools to respond. That’s what saves lives, and there’s plenty of proof to show it works.”

As for the future, J.R. now has an implantable cardioverter-defibrillator (ICD) in case SCA strikes again. Since the 2015 event, the ICD has activated once while he was on the golf course. He came through that second event with flying colors. “I think the placement of the ICD in my chest has actually improved my golf swing,” he quipped.

Feeling inspired to take a CPR, AED and first aid class yourself? Click here to learn how to save a life today